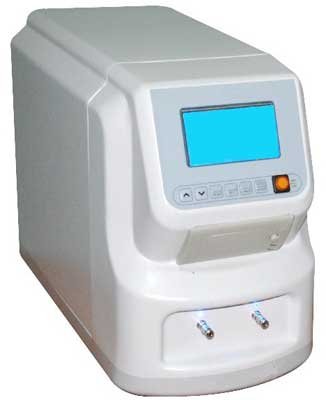 We are offering helicobacter pylori 13c test system.introduction :
helicobacter pylori is a spiral-shaped bacterium that inhabits the stomach in about 50% of the world population. It is passed from person to person and it is usually contracted during childhood. This bacterium causes a chronic low-level inflammation of the stomach lining and it has been proven that its presence is associated with the development of duodenal and gastric ulcers. It has also been proved that it has an influence in stomach cancers.
the infection is less common in the countries with good sanitary conditions than in developing countries where the percentage of infected adults can reach 80%.
in 2005, barry marshall and robin warren received the nobel prize for medicine for their research about the helicobacter pylori. They demonstrated that gastritis and ulceration of the stomach are the result of an infection of the stomach caused by the bacterium helicobacter pylori.
confirming the presence of helicobacter pylori is important as it can easily be eradicated with antibiotics and once the bacteria are gone from the body, the chance of being infected again is very low.
system introduction :
this system also known as a 13c infrared spectrometer is composed of high selective 13co2 and 12co2 detectors, which are used to analyze the co2 exhaled by a patient in order to diagnose whether this patient is infected by the helicobacter pylori.
this machine has a built-in printer and a lcd screen. It can work independently, or linked to a computer.
this system can also connected to an optional infrared spectrometer in order to test up to 6 patients
13c breath test (non- radioactive) method to test helicobacter pylori, no harm to human body, applicable to children, pregnant women, and aged, weak people
clinic application :
to test helicobacter pylori in human stomach and duodenum
system specification :
analysis speed: 3 mints/samplerange of density: co2 1-5%sample volume: no less than 120ml/pveracity: 0.3δ‰13catmospheric pressure: 860hpa- 1060hpaworking temperature: 10°c-35°crelative humidity: ≤80%power supply: 100v-220v, 50-60 hzdimensions: 400mm(l)*200mm(w)*300mm(h)weight: 11kg
features :
igh accuracy: less than 0.3δ‰13ceasy operationquick test: each test takes less than 3 mintspowerful database management: the software has memory, check, sort data and analysis functionsself-checking function: unique self-diagnosis, self-adjusting functions. Users are very well informed about its working conditionlow cost operation: low power, no other gas consumptionfriendly software operation screen: english operation screen, easy to usesafe test method (non- radioactive method) no harm to human body, applicable to children, pregnant women, and aged, weak people
options

optional expander system it is used to link to mm-hp001 that adds 10 channels more for testing, can test up to 5 patients in one run