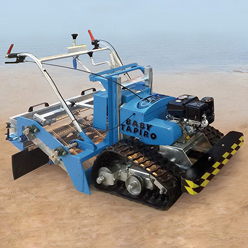 Unlike other beachcleaning machines, Baby Tapiro “drives” itself alone in fact, thanks to its lightness and to the drive system makes its use simple and effective and brings the manageability of this beachcleaning machine to never reached levels.
Baby Tapiro, represents the revolution in the traction beachcleaning machines; in fact, thanks to the innovative three marches gear, plus reverse drive, and with the driving system with turning control, its use is simple and efficacious and brings the manageability of this tool to elevated levels.
Baby Tapiro exploits the technology already developed by CFC for Speed Tapiro and makes itself small, practical and easy to handle. This reduces significantly the operator fatigue during the beachcleaning operations.