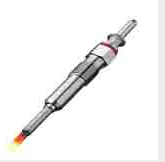 A glowplug (alternatively spelled as glow plug or glow-plug) is a heating device used to aid starting diesel engines. The glow plug is a pencil-shaped piece of metal with a heating element at the tip. This heating element, when electrified, heats due to its electrical resistance and begins to emit light in the visible spectrum, hence the term “glow” plug. The effect is very similar to that of a toaster. Heat generated by the glowplug