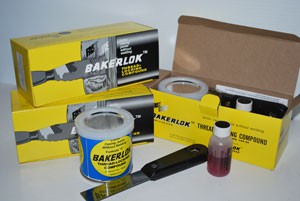 Bakerlok Thread-Locking Compoundreplaces welding for locking casing joints on the bottom lengths to prevent unscrewing while drilling out cement. Welding of shoes, couplings, and collars to casing often weakens the casing and should be avoided wherever possible.

High Lubricity Tests were made using Bakerlok on one side of a standard coupling and API Modified thread dope on the other. Identical pin threads were made up into the coupling. For the same amount of torque, the joint with Bakerlok made-up furrher and was cooler than the joint not made up with Bakerlok.

Leakproof Seal. Joints made up with Bakerlok using standard torque were testing with water pressures in excess of the listed bursting strength of the casing without any signs of leakage.

Easy Mixing. The Bakerlok formulation ensures stable consistency to permit mixing under a variation of temperatures existing in the field, i.e., from 9 degrees to 115 degrees F.

Ample “Potlife” After Mixing. The selection of the chemicals in Bakerlok provides a “potlife” in excess of one hour; even at temperatures of over 100°F.