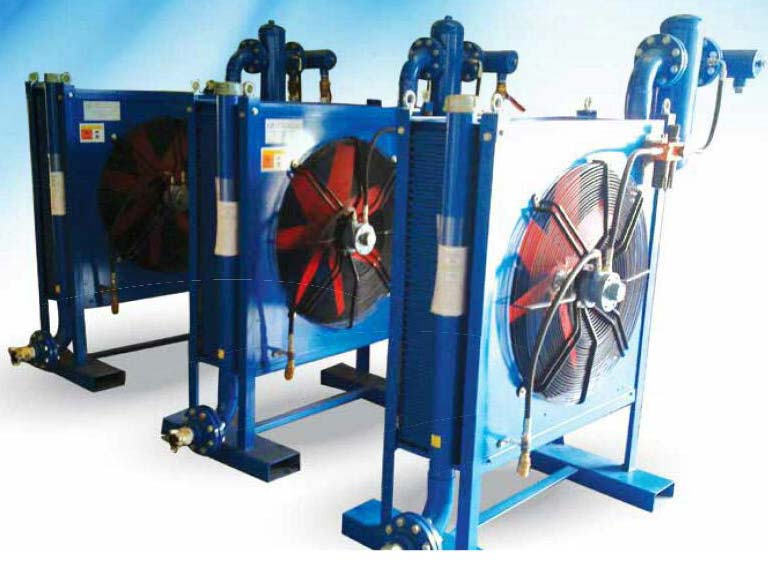 We are offering air coolers. Air compressors produce hot, wet and oily air. Moisture and particulates compromise cleaning effectiveness to your target surfaces the air leaving the compressor is hot ,dirty ,wet and generally at a higher pressure than the down stream equipment requires . A typical 50 dm3sec (100 scfm) compressor will push 4 500 liters of water and 8 liters of degraded compressor oil into the system in a year along with considerable amounts of dirt particles before this air can be used it needs to be treated to remove the contaminants have its pressure reduced to the right level, and in many cases have oil added to lubricate downstream equipment. The accumulation of condensed water in the system can lead to pressure drop also .so nowadays, most compressors have an after-cooler as a standard .fitting to perform the function of removing water, and some oil vapour. However, after coolers are also available as free standing units the after-cooler, through condensing, usually reduces the water content of the air by around 68% and uses approximately 2% of the total package power. why dry air ? all pneumatically operated equipment is designed to perform more efficiently and reliably with clean, dry and properly lubricated compressed air. Atmospheric air is loaded with moisture. At 100 psig6.89 barg, it takes 7.8 cft0.22 m3 of free air to produce 1 cubic foot28.2 liters of compressed air. What may have been acceptable levels of water vapor and contaminants in atmospheric air become intolerable in compressed air.
at 750 f23.90c and 75 percent relative humidity a 500 scfm14.2 sm3 per minute compressor takes in 90 gallons340.6 liters of water in vapor form in a 24-hour period. An after cooler will condense only about half of it. The remaining moisture, if not removed, goes into the air lines and causes rust and scale in pipes, valves, instruments, air-operated tools and equipment.
moisture washes away lubricants needed to run the air compressor. Due to the heat of compression, this oil decomposes to form a corrosive and sticky substance which causes slow and inconsistent equipment operation down stream.