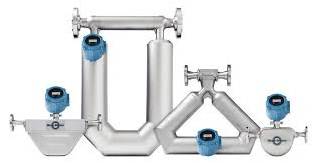 Coriolis flow meters are instruments that, using the Coriolis principle, me. The structure of our Coriolis Mass Flow Meters was consisted of a pair of bended tubes. The principle is to detect Coriolis force forced a pair of tubes from inner mass flow by fluid. Coriolis meter artificially introduces a positive and negative Coriolis acceleration to the process. As illustrated in the diagram below, the entire process is split and re-directed through two curved tubes. The tubes are vibrated at a multiple of their natural resonant frequency. Miniature velocity transducers comprising of a coil & a magnet are each mounted on one of the tubes as shown. When no flow is present the tubes vibrate and the sine wave output of each velocity transducer is in phase. When flow is initiated the tubes will begin to twist due to the Coriolis acceleration induced by the moving mass. This causes the sine waves to shift in relation to one another (either lead or lag depending on the flows' direction) and a measurement is made.