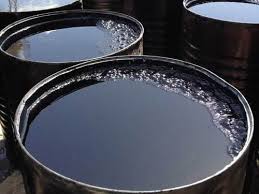 Cutback Bitumen is made by reducing the viscosity of and ordinary bitumen by adding mostly petroleum type solvent. Cutback Bitumen are used because their viscosity is lower than that of neat asphalt and can thus be used in low temperature applications. After a cutback is applied the solvent evaporates away and only the Bitumen is left. A cutback bitumen is said to cure as the petroleum solvent evaporates. Cutback bitumen are typically used as prime coats and tack coats. Generally are divided into three groups depending on their volatility of the solvent added: Slow Curing often called "road oils, " are usually a residual material produced from the fractional distillation of certain crude petroleums. Traditionally any kind of aromatic, naphthenic and paraffinic oils are used. Slow Curing liquid bitumen materials can be prepared by blending bitumen with an oily petroleum fraction. Medium Curing are a blend of Bitumen with lighter hydrocarbons such as kerosene.  Rapid Curing products are prepared with a light, rapidly evaporating diluent such as a naphtha or gasoline. As a solvent required to produce a cutback asphalt, it is possible to use not only the above described petroleum type solvent but also a coal type solvent or may be a mixture of various solvents and an additive in order to further improve the performance of final products (e.g. anti stripping effect).  Each of these three types of liquid asphaltic materials is produced in six standard grades. The prefix of each grade denotes the type: SC for Slow Curing, MC for Medium Curing, and RC for Rapid Curing. The suffix, or grade number, denotes the consistency range of the material. In each type, grade 0 is the most liquid, grade 5 the most viscous, with the intermediate grades ranging in consistency in an orderly progression. At room temperature, the consistency of grade 0 materials resembles that of heavy cream while grade 5 materials have the consistency of heavy molasses in cold weather. These products "cure" by the evaporation of the petroleum diluent. Formerly the advantage of application of cutback asphalt mixtures is a difference in the reduced paving temperature. However in these days cutback asphalt are used mostly as prime coat and/or tack coat. When cutback asphalts are used as a prime coat, the cutback asphalt is sprayed to the surface of untreated sub grade or base layers in order to fill the surface voids and protect the sub-base from water penetration; stabilize the fines and preserve the sub-base material and/or promote bonding to the subsequent pavement layers. When used as a tack coat, the cutback asphalt is applied between hot mix asphalt pavement lifts to promote adequate bonding. This cutback promoted adequate bonding between construction lifts and especially between the existing road surface and an overlay is critical in order for the completed pavement structure to behave as a single unit and provide adequate strength. If adjacent layers do not bond to one another they essentially behave as multiple independent thin layers, none of which are designed to accommodate the anticipated traffic imposed bending stresses. Inadequate bonding between layers can result in delamination (de-bonding) followed by longitudinal Wheel path cracking, fatigue cracking, potholes, and other distresses such as rutting that greatly reduce pavement life.